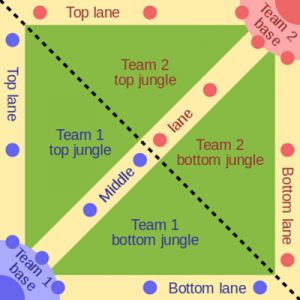 A simplified representation of Summoner's Rift. The yellow paths are the "lanes" where endless waves of troops known as minions march; blue and red dots are the defensive turrets that defend the lanes. Not pictured are the two turrets that flank each Nexus - the ultimate goal of the game, which are within each team's base in their corner. The dotted black line is the river that divides the sides.

No category
No comments
Tags: No tags