SKT T1 is arguably the most dominant League of Legends team in the world, with more total LOL world championships than any other team. Surprisingly though, the team has never partnered with a gaming hardware company on merchandise. That all changes with the ASUS ROG Strix SKT T1 Hero Edition. This premium laptop contains the best that everything ASUS has to offer, and is a complete gaming machine 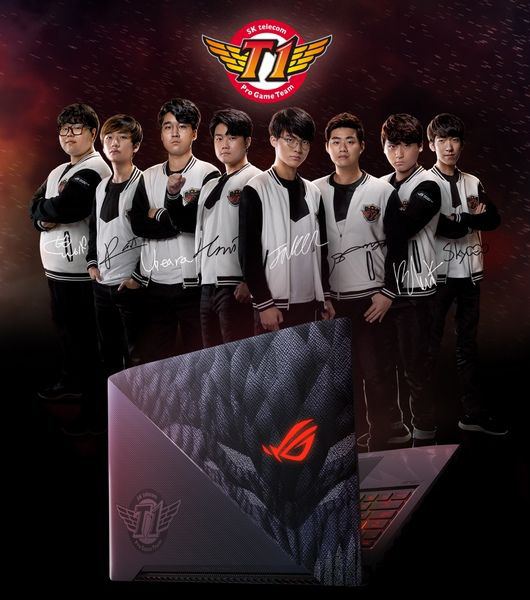 A GTX 1060 graphics card allows gamers to max out the settings in League, while an Intel i7 processor means that almost any game or multimedia program could be run on the computer. The ROG Strix line features a 100 percent sRGB color gamut, making it a fantastic choice for media editing. All this power is packed into a relatively slim frame, along with all the ports you could need.

If you've been looking to upgrade your current gaming setup, this may be the opportunity. Going for about $1700 when it first releases, according to Engadget, the laptop will have everything a mobile gamer needs. Compared to the last iterations of the ROG Strix, the graphics and CPU upgrades should be significant enough to convince fans of SKT T1 to upgrade their mobile rigs. For League of Legends players currently confined to a desktop setup, whether because of budget concerns or power availability, the ASUS ROG Strix SKT T1 Hero Edition will offer a new way for gamers to take their game on the road.

For the SKT T1 fan, this is the perfect laptop. The body features the team's logo and colors. The laptop also comes with an SKT jersey, mouse pad, and posters of the team members. For an individualized touch, the bottom of the keyboard touts Faker’s signature. Faker, for the uninitiated, is the team’s most famous member known for dominating the middle lane of the game using mage-type characters in crazy outplays.

This new laptop marks a new era for eSports. While hardware manufacturers like Razer and Steel Series have partnered with eSports teams in the past for peripherals or other computers, ASUS's high-profile partnership with SKT is going to release a wave of new sponsorships. And with LOL ramping up how seriously it deals with its competitive teams, this new cooperation between teams and companies may be just what the eSports industry needs to take off into the main steam.

Are you thinking about buying this laptop? How do you feel about the future of eSports sponsorships? Let us know in the comments!