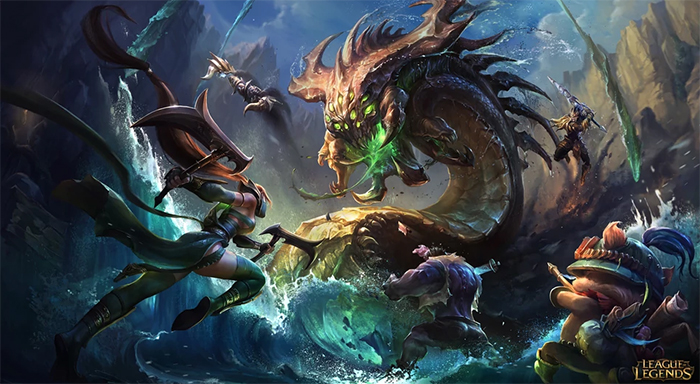 Three lanes to fight your way to the enemy base.

A forest populated by neutral monsters of varying degrees of toughness, the toughest of which provide buffs and/or gold for your whole team.

Powerful turrets defend key areas on the map. You must confront these in addition to your enemies if you are to make headway toward victory.

A map dividing river that lies in neutral territory, allowing for quick travel between lanes.

Two bases at opposite corners of the map, populated by a shop, a Nexus, two turrets to defend the nexus, two base gates that only the team aligned with the base can pass through, and inhibitors that suppress the other team's minions.

Summoner's Rift during its history had a total of four shopkeepers.

The first one was a Manbacon. This is an infamous race that is living in Runeterra. Manbacionians usually set up shops in a small pack and they also like to smoke. He sold some standard starting items like the Doran's Blade, the Doran's Ring, the Doran's Shield. He was selling his weaponry at both the Blue team and the Purple team bases.

The second shopkeeper was an elderly male Yordle with a cart pulled by an animal resembling a big cat or a rabbit of an unknown species. He replaced Manbacon and he was also present for both the Blue and the Purple bases.

It is the default and first version released of the map.

A variant of the regular Summoner's Rift with a winter seasonal variants, designed for the 2009 Snowdown event. This version was a permanent option before it was replaced with the Autumn Version on November 2010. It was also available during the 2010 Showdown, replacing the Autumn version temporarily and made a return for the 2011 Showdown in December 2011. An updated version was released for the 2016 Showdown. The Winter Version of Summoner's Rift has a few differences:

A mostly white background, because of the snow.

Snow falling and covering the terrain.

The River is frozen.

Presents and Poros can be seen throughout the map.

There are coffins at bottom right area of the map. These signify the "death" (cancellation) of several champions.

The Blood Moon Version of Summoner's Rift was a special variant designed for the 2017 Blood Moon Event.

The Arcade Version of Summoner's Rift was a special variant designed for the August 2017 release of three Battle Boss skins.